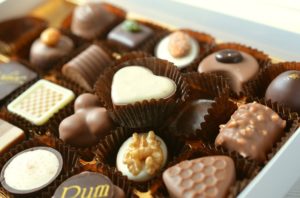 Here at Wockenfuss, we strive to put our customers first; whatever type of chocolate strikes your fancy, we hope to deliver.

Chocolate lovers everywhere can find the treats they love. Here at Wockenfuss, we strive to put our customers first; whatever type of chocolate strikes your fancy, we hope to deliver. Here is a closer look at three common varieties of chocolate that you can include in your next order!

Milk chocolate is one of the most popular types. There’s a good reason for that – it’s sweet and creamy with a mild flavor and texture. Twelve percent of the chocolate is milk; in this mixture, there is at least 10% chocolate liquor, which gives it its unique appearance. Despite the name,  chocolate liquor doesn’t have any alcohol in it – an important distinction! It’s produced through a blend of cocoa solids and cocoa butter. Two other key ingredients are sugar and emulsifiers, which lend it more sweetness than dark chocolate, which tends to be heavier, richer, more full-bodied, and on the whole, more bitter than milk chocolate. Another thing to note about the properties of milk chocolate is that it is soft and melts easily.

Now let’s turn our attention to white chocolate. It’s easy to argue that it doesn’t actually count as chocolate due to some missing ingredients, but one taste and you’ll change your mind! Either way, it’s incredibly delicious – cookies and cream chocolate bars wouldn’t be the same without it! Cocoa butter is mixed with cream and sometimes milk; milk solids are also sometimes used. In the end, though, it’s the percentages that matter most: there must be at least 20% cream or milk used in the creation of white chocolate, along with at least 14% milk solids. Vanilla can give it another kick of flavor, and it’s much sweeter than either milk chocolate or dark chocolate!

At last we come to many people’s favorite type – dark chocolate. Believe it or not, bittersweet chocolate isn’t the only type of dark chocolate available. There’s also semisweet, often used as an addition to baked goods. The difference is that semisweet has a little more sugar added. Because dark chocolate has a much larger ratio of cocoa to other ingredients compared to its counterparts, it also has many more antioxidants in it.

Wockenfuss Candies has the Sweets You Crave

Wockenfuss Candies is proud to be one of the oldest candy makers in Baltimore. Since 1915, we’ve been providing an extensive and delicious variety of candies and chocolates. We also offer lovely gift assortments that can be enjoyed at all sorts of events.

Categories: Chocolate | Tags: chocolate, chocolate insights, and sweet treats
This entry was posted on Friday, October 11th, 2019 at 9:50 pm. You can skip to the end and leave a response. Pinging is currently not allowed.